Since early communal living, humans have banished those who are either different or unproductive, due to an atypical physical, mental or emotional condition.  Deemed different and some unproductive and/or non contributors to the tribe they were either banished or brutally treated.

Primitive humans attributed supernatural forces at play to explain the biological, cognitive, emotional, spiritual, and moral disparities among the tribes people. Regardless of the attributions to genetic or emotional disparities, those who were different were, and are, targets for society’s unresolved selves.

The following illustrations demonstrate a progression of  beliefs, fascination, control methods, and abusive devises of those deemed unworthy to be in the community by those others in power: 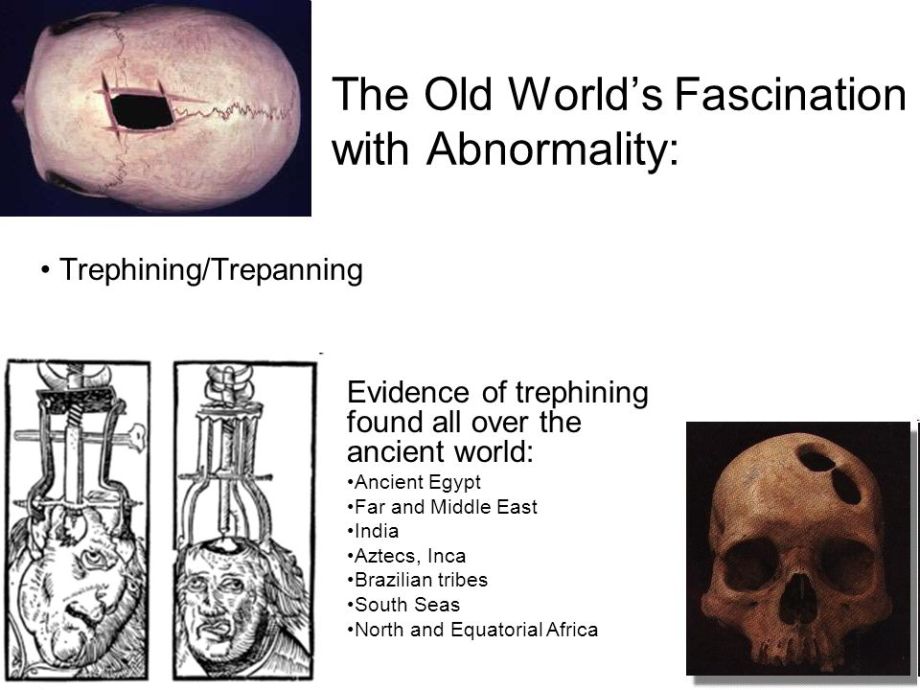 Trepannings – Supernatural forces were at play to explain the nonconformist’s behavior. A special few basically drilled compliance into the deviant.

Medieval nonconformists, especially women who did not abide by the Christian patriarchal mindset were deemed to be either witches or possessed by the devil. The above picture depicts men exorcising women after a Moon Madness dancing spree. Based on the book,  Malleus Maleficarum, these women’s unconventional behavior conveyed their relationship with the devil.  To control that behavior and show the rest of the community who had the power, the nonconformist women would be brutally exorcised, resulting for many a slow cruel death.

The First Insane Asylum in London

The Bethlehem Royal Hospital was founded in 1330. Just as in medieval times,  the treatment for the deviant or as they were called at the time, prisoners, was deplorable, brutal, and inhumane. If one would compare this picture and the one where the exorcism is taking place, there are few differences other than location. The elite few, as seen in both pictures, are men judging, chastising, and perhaps, controlling the mental/emotional state of deviant women. It is a perfect depiction of a controlling patriarchal society exercising dehumanizing control onto, perhaps free thinking, nonconformist women.

Shackle and Control the Nonconformist

Not much has changed from the our past. Why have we not learned from those atrocious mistakes? Perhaps the symbolism of securing humans who have different perceptions embody society’s unresolved, unacknowledged issues. By putting them away and securely shackling them, the rule abiding citizen does not have to face self. The issue of self is safe within the confines of thick walls.

She is not related to me!

Victorian institutions did not progress in deterring stigmatization of those who acted and looked different. As in the medieval times, more women than men went into the asylum. Many were dumped against their will due to being different and apart from what was (still is) considered human normalcy.  This Bethlem patient radiates, emanates, and embodies the reflection of her community’s projection and displacement onto her. Abused and abandoned at home, abused and abandoned by the system, this patient is not allowed to be self and have a chance in life and in the outside world.

She Needs to Stop Complaining and Do her Chores! 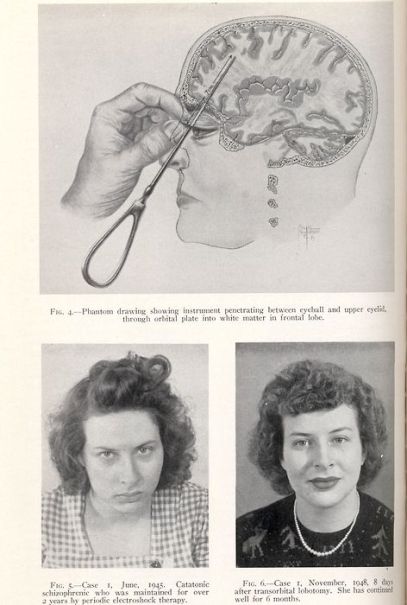 Once again women are being depicted undergoing invasive procedures to calm and sooth any say,  behaviors, or thoughts contrary to the patriarchal system.  What better than to have a zombie like wife who would do her wifely duties, cook and clean without any complaints?  Little did the husbands know that electro shock or a lobotomy would keep their wives maimed for the rest of their lives and unable to perform as expected.

Take Your (Lobotomy) Pill or you will Not be Discharged!

Presently, the biochemical paradigm of abnormality is the treatment option for the nonconformist and complaining mass. Deemed ill and unwell,  the authoritarian elite system of professionals indoctrinate the use of altering molecules to make the struggling human well.  However, wellness does not come without a price, which is dependency on the medication and severe side effects for the user. To ease the side effects more medication is prescribed.  There are many studies and anecdotal statements disclosing that psychiatric medications are not benefiting or curing human suffering. The only benefit these medications have are to procure an economical advantage for the producing company and secure social control.

This image conveys what many nonconformists are undergoing.  Agencies supposed to help them reintegrate back into society distribute pills to make them whole. Places where like-minded individuals can have a sense of belonging and learn what they never did to be an integral member in the community either have closed down or have long waiting lists. Where is one to go if one is not wanted or appreciated for who he is?  It is known that medication does not unify the forgotten ones into the community. Just as past  practices and procedures proved to be brutally ineffective to cure the uncurable, we as a society with an obsolete mindset continue to banish the ones who are different.

History Repeats Itself: We Learned Nothing

History is repeating itself. The only difference between now and the Middle Ages is that brute force is replaced with medication. Most individuals who are incarcerated or put away from society comprise the deviant marginalized persons of society. Many of them are known patrons of the mental health system, carrying with them the cross of a label, stigma, and banishment. Replacing medication for illegal substances many reenter the system to be chemically shackled to the cell bed. The medicalized brain numbs and makes the prisoner complacent with the chemical restraint.   Little is said about the darker side of anti-depressant and neuroleptic which is the side effect: akathisia.   Some individuals on psychiatric medication are locked up for the homicide they committed when their attempted suicide failed.   Others are behind bars because they followed the commands of their disembodied voices, while others are so pained and forgotten that it is impossible for them to conform with the masses. Lonely and forgotten society repeats what their original micro community did to them, excommunicate the pained person from the rest of the tribe.

The above illustrations convey a subject/object, we-are-better-than-them mentality. Just by the medical model’s predominance of unilateral categorizations of what is pathological, social constructs , and the media comply with the disparaging reductionist point of view of the nonconformist as individuals too sick to be allowed inclusion with the rest of society.

However, the true seed of fear and banishment of the licentious other stems from the conformist’s apprehension (if not phobia) of being or turning into that nonconformist deviant.  Foreboding difference creates a society where blame, shame, marginalization, medicalization, and elimination of those who are different, sadly, endemic.

Banishing and annihilating another human for his or her difference is not the ethical humane answer.

Since a little of them is in us,

And a little of us is in them,

And that makes Us and Them a We

Healing and Integrating is a We Process

Unlike the generational systematic societal views and treatment of the nonconformist, the above illustration conveys the ethical healing approach to integrate the pained marginalized person back into the society that once rejected him. It might take some time, but more and more physicians, social workers, survivors of psychiatry , and organizations like : Mind Freedom International, Hearing Voices USA and others are voicing Big Pharma’s and the system’s intention to control, stigmatize, and engage in the genocidal elimination of aberrant individuals. Paradoxically, the neoliberal mentality does not allow or give room to the non-productive being.  Why continue the abuse and doling out of medication if the person cannot improve on the medication?   With a paradigm shift to an empathic, integrated, and mindful practice, disparaging minds can create a resolution to this systematic atrocity and be allowed to reintegrate and contribute to society.

One comment on “History of Mental Illness Treatment: Medical and Societal Treatment of the Non-Conformist”